This one is going to be the toughest so far. Hopefully someone will get it.

I will post a hint later this evening if I can. Everything you need to decode the message is in this post.

This is a type of hashing, but I am sure you added something to the original hash because that is not how it usually looks.
it has a max length of 32 and you have about 40.
so it could be that you add an extra piece of information to lead the one who just reads it to the answer.
the way to solve this is to do COMPUTER SCIENCE MATH which will tell you the original length of the hash.

I was right you added some random numbers to it.

I want you to do one thing for it to be a CHALLENGE.
Don’t say the answer or help others solving it.

Are you sure you don’t want any help?

but I am sure you added something to the original hash because that is not how it usually looks.
it has a max length of 32 and you have about 40.

I was right you added some random numbers to it.

You were right? There are no random numbers added to it.

This is a list of hash functions, including cyclic redundancy checks, checksum functions, and cryptographic hash functions. Adler-32 is often mistaken for a CRC, but it is not, it is a checksum.

Also, remember when you’re 100% sure of something, or know for certain that you are right about something, but you have no evidence, that’s your brain telling you that you’re on the wrong track

Or maybe not. Maybe it’s intuition.

But here’s what I will say: there are no random numbers added. And you’re confusing bits and bytes

In cryptography, SHA-1 (Secure Hash Algorithm 1) is a cryptographic hash function which takes an input and produces a 160-bit (20-byte) hash value known as a message digest – typically rendered as a hexadecimal number, 40 digits long. It was designed by the United States National Security Agency, and is a U.S. Federal Information Processing Standard. Since 2005 SHA-1 has not been considered secure against well-funded opponents, and since 2010 many organizations have recommended its replacement ...

In cryptography, SHA-1 (Secure Hash Algorithm 1) is a cryptographic hash function which takes an input and produces a 160-bit (20-byte) hash value known as a message digest – typically rendered as a hexadecimal number, 40 digits long.

Hmmm… are you sure you’re right and it’s not a hash?

If you are saying that it is a SHA-1 hash, I am still unsure as how to solve it. Is the salt somewhere in the post?

Another hash that usually gives 40 digit long hexadecimals is called ripemd160. I am not sure as to how to unhash something and I am not even sure that this is a hash to begin with.

Everything you need to decode the message is in this post.

This is really interesting to me, I just can’t figure it out though. 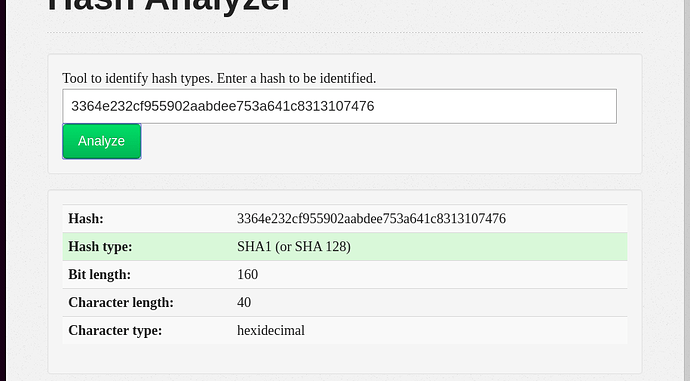 Online it says that sha1 hashes are 1 way and next to impossible to decode.

@miguel im stumped, where else could you search for it?

Yes, that’s right. Not impossible. In fact, SHA-1 is considered obsolete by some.

But that’s not the only use of a hash.

Think about what the primary use would be… to calculate the hash of a file, so that you can make sure that it hasn’t been changed in any way. If that doesn’t make sense now, @ChocolateKid, it will after the blockchain workshop

Most blockchains use hashing to make sure that there hasn’t been any change, not to encrypt or decrypt things.

Same thing here. This hash doesn’t have the message needed for Challenge #7 – it just acts like a hash. An identifier. You don’t need to decrypt it.

where else could you search for it?

There’s lots of general search engines, and specialized ones too. And some websites and services have searches.

hmm so for example:

and you cross check the hash you have with the hash that was started with, and they are the same it means that the file or string has not been changed and is the same?

How would I utilize this as an identifier though? Like what would I identify it with?

There’s lots of general search engines, and specialized ones too. And some websites and services have searches.

i searched up sha1 decrypt and tried all the websites but that didnt work. I feel like I dont understand something about how hashes are used still

is it possible that there is some file or text that I am supposed to hash to see if it has the same value as the hash you gave? But how would this help me get to the solution?

Ok, open a text editor and create a file called “test.txt” and write “hello people” in it and nothing else. No enter or CR or LF. Just “hello people” without the quotes.

Now save the file, and you can hash that file – it calculates a hash based on that file. There’s no way to reverse it. But if your file is just like mine, ie: exactly the same, you’ll get the exact same hash.

So think of a hash as being a fingerprint. It will always give you the exact same hash on the same data. But if the data changes even just one byte, you’ll get a brand new hash.

So in blockchain, it’s literally a chain of hashes to make sure nobody’s messed with the block of data.

But in Challenge #7, the hash just identifies a particular file somewhere. So the first part of the challenge is to find somewhere that references this hash on the internet.

Ohhhhhhhhhhhhh I see. When this hash is searched up there are no results.

I was trying to use https://computehash.com/?gclid=CjwKCAjwxaXtBRBbEiwAPqPxcNcdw51_cbsd3rkNRoAMdYeLGe1O5o_zCp8eh818nGNvu84c8aAzHBoCeBMQAvD_BwE

and the text from the original post that you had posted because you said everything needed to solve it was in that post. Where would this hash be referenced on the internet?